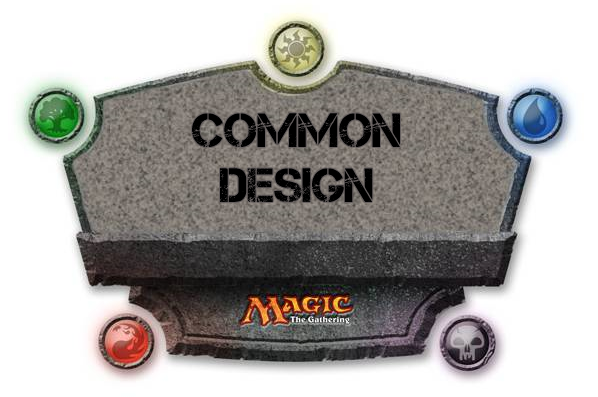 This week, I want to do a series on Commons. Specifically, I want to focus on the design aspects that Wizards of the Coast considers when it comes to creating Commons. To do this, I will primarily be relying on Mark Rosewater's Making Magic column, as well as his recent Drive to Work podcasts.

Today, I want to start by discussing New World Order, which is a specific design philosophy that governs what is acceptable at Common.

At its heart, New World Order is about limiting the complexity that new players are faced with. Since Commons make up the bulk of the cards that new players will interact with, if you limit the amount of complexity at Common (and shift it to higher rarities), you effectively lower the learning curve for new players without reducing the overall complexity of the game.

Rosewater identifies three kinds of complexity:
The goal of New World Order is to minimize the first two without adversely affecting the third.

So how is that done? Rosewater uses the term "red-flag" to identify a Common that violates the simplicity requirements of New World Order. While he did not provide a full set of parameters, here are some of the ways a Common can find itself "red-flagged."
Now, an important caveat. Just because a Common is "red-flagged" doesn't necessarily mean that it won't be printed. But it does mean that the card has to justify its existence in some way. Maybe it features the new mechanic for the set. Maybe it actually simplifies the choices that a player has to make. In fact, Rosewater states that in any given set, approximately 20% of the Commons violate New World Order in some way or another. But the point is that they do so intentionally in order to accomplish something that the set otherwise could not accomplish.

If you're interested in reading more about New World Order, check out Rosewater's article on it here, and his more recent podcast on the topic here. Thanks for reading.

Next time, I will discuss the role that Commons need to serve in a Magic set.
Posted by gwyned at 2:47 PM

Want to support Writer Adept? It's easy! You can donate through PayPal below. Or, next time you shop at Amazon.com, just start your shopping with the link below, and a portion of your purchase will go to support this blog - and it won't cost you a dime!

MTGOTraders.com is THE source for
Magic Online cards.
Give them your business, and tell them
Writer Adept sent you!